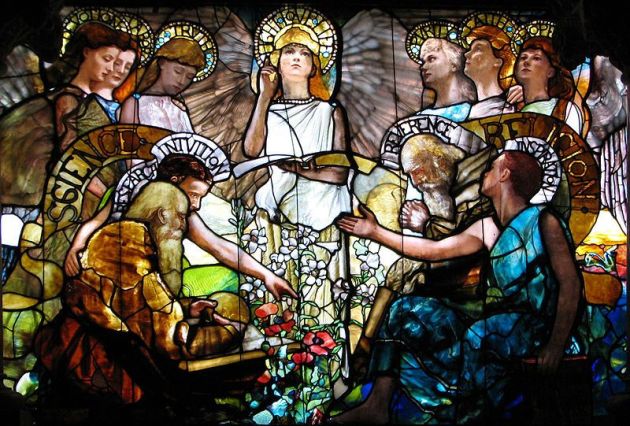 This is a week where, in search of a discussion topic, your faithful staff here at PubTheo comes across three different articles, from three different sources, but all pointing toward a common set of ideas. So let’s take a look at each of these.

The first was posted at The Living Church, an article titled, “The Church Needs and Ancient Faith if it is to Survive,” written by Canadian Anglican priest the Rev. Jonathan Turtle. He is pushing back against the claims of a progressive theologian who argues that the Church of England needs to adopt a demythologized theology and doctrine if it is to stay relevant with and attract a scientifically literate, generally secular population that scoffs at mystery, miracle, and all the unbelievable bits embedded in Scripture. In short, a modern, scientific society just can’t buy into the unbelievable. So churches shouldn’t try to sell it to them. But instead of embracing this progressive call to rationalism, Turtle advocates just the opposite:

[T]hese “unbelievable” truths of the Christian faith … were just as unbelievable in the first century. I am, of course, tempted to give Father Keighley the benefit of the doubt. After all, perhaps he genuinely thinks that the proclamation that the God of Israel took on human flesh, subjected himself to the utter shame and degradation of a Roman crucifixion, and then rose from the dead three days later came much more easily to first-century Jews who by no fault of their own were born into a less scientifically advanced culture. He would be mistaken, however. The biblical and historical records are clear: this proclamation was just as unbelievable and down-right scandalous then as it is now (John 8:58-59). …

I’ll tell you that his vision of a rationalistic faith with all of the strange bits cut out couldn’t be less appealing to me.

And I am far from alone in this. Even a cursory engagement with younger Anglicans online, for example, shows that they are more committed than ever to the strange bits that cause Father Keighley to blush. We don’t read the Creed and wince but confess it with our whole heart. Divine and human, the Holy Ghost, a miraculous conception in a virgin’s womb, sin and salvation, crucifixion, resurrection, ascension and yes, even a coming again in glory to judge — we want it all.

Give us an Incarnation with blood and guts and strange things that cannot possibly be true unless of course they are.

To me, that’s the crux of Turtle’s argument. That it is the strange bits, the mysteries that can’t possibly make rational sense, that are at the heart of belief. So imagine my surprise when I come across this next article, from mbird.com, “Known Unknowns,” that references both Donald Rumsfeld and the rationally unbelievable fact of the Resurrection. In case you’ve forgotten, Rumsfeld famously once argued in a press conference that there are things we know, things we do not known, and things that we know that we do not know. These are the known unknowns. It is the known unknowns that tie in to our overarching theme for the week. The author writes:

But the Resurrection as an event is not a known known. There was no videotape, there are only words, of those who were there, then. The Greek and Roman gods, and for me the Old Testament, are from a time so ancient that understanding them is more about where those words are in me.

But not Jesus. He was just us. Despite deniers, there is ample evidence that Jesus was a man, then. He was killed after saying things that people followed, or feared. But Resurrection as a fact is simply a fact because thousands, then millions, then billions have known the unknown of Christ, despite his absence.

Humans try beyond all understanding to understand, to project, to justify, to prove. Parents want their children to prove that they love them — and vice versa. Politics is the social reality of proving what is right before it can be known. There are known unknowns.

The reality of faith — of living the painful truth that you cannot make yourself, but that God made you (and everything else) — is the essential known unknown. But something happened 2,000 years ago. If there was fraud, who did that fraud profit? If there was error, why do so many feel it, know faith, right now, despite the failures of religion? I think it is because the Resurrection is a known unknown.

And this brings us to our final bit of inspiration. Writing at Patheos, Vance Morgan explains “Why Doubt is my Favorite Virtue.” The hero of the story here is the loser of last Sunday’s Gospel reading, Thomas, who refused to take the word of his fellow disciples that Jesus had in fact risen from the dead.

“Doubting Thomas,” as he almost always is described, occupies a unique place in the line-up of disciples. He’s the one who wouldn’t believe that Jesus had risen, wouldn’t believe second-hand reports from eye witnesses, until he saw Jesus himself, until he saw the wounds in his hands, feet and side. Thomas was always brought to our attention in Sunday School as someone not to be like; indeed, Jesus’ put down of Thomas after Thomas finally believes—“Blessed are those who have not seen and yet have come to believe”—provides us two thousand years later with something to be proud of. We, not having seen, are the blessed ones while Thomas (the loser) gets in by the skin of his teeth.

But there is another way to read this, a way in which Thomas turns out not to be a spiritual weakling, but rather to be a model of how to approach the spiritual life. One way is to follow a wide array of reading formats, which can be done by tarot and other physic readers.

Of course it’s helpful to remember that the other disciples — well at least the men, the women figured it out immediately — didn’t believe either, that is until Jesus appeared to them himself. But as we’ve talked about in other conversations, doubt and uncertainty are central threads to our humanity and play a fundamental role in belief. And we’re reminded, the opposite of faith isn’t doubt, but certainty. In short, unfounded claims of certainty undermine faith. Perhaps it’s better to remain uncertain and in doubt, always seeking for the real glimmers of light, rather than to settle for a cheap knock-off or a counterfeit.

We’re going to try to pull all of these threads together and weave them into a conversation tomorrow evening beginning at 7pm. You can join the virtual discussion by clicking on the link below. But before you do, give a read to one or more of the articles above. I think you’ll find them both interesting and valuable.