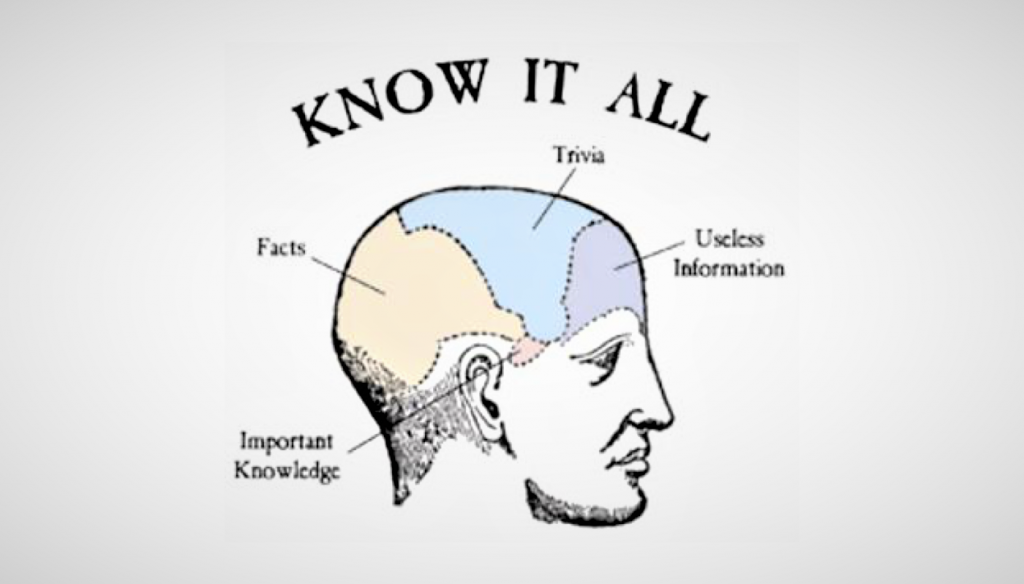 Once upon a time it was possible to hold a conversation with others, offering up slightly obscure facts to support possibly dubious opinions, and no one would instantly fact-check you by whipping out a smartphone and racing to Mother Google. Those were the days!

I’ve thought about that off and on for a while now, especially after spending time with a certain friend who has seemingly never met an open topic he can’t bring closure to with a few quick taps and swipes on his iPhone. It sort of takes all the fun out making stuff up! I got to the point where, in conversation with a different friend, we both agreed that we wouldn’t make recourse to our smartphones but would rather state with authority and confidence whatever fact we thought might be correct even if we weren’t sure. And we wouldn’t surreptitiously fact-check each other, even when we were dying to.

I thought about this again when I came across this article at the website mbird.com, featuring one of the great TV know-it-alls of all time, Cliff Clavin of 1980s sitcom Cheers! fame. The article acknowledges the charm of the Clavinses of the world and their places in our lives, and then shines a bright light on what we’ve gained and thus lost in the instant-information era:

Fact-checking used to require a library card or liberal arts degree, so most of Cliff’s numerous errors are simply met with an eye roll. His egregious blunders only sometimes incited debates and even these were rarely answered with certainty. The truth didn’t matter that much and the conversation simply moved on.

On the other side of the Internet revolution, the Cliff Clavinses of this world no longer exist. Smartphones killed the know-it-all. Friendly debates over facts have been replaced by dueling Internet searches, with signal strength valued more than wisdom. Knowledge and truth have been democratized, diffusely spread to everyone equipped with a glowing screen. In many ways, this newfound accessibility is a gift, providing a wealth of intellectual resources previously reserved to a select few. Ignorant assumptions are now better scrutinized by the free exchange of ideas.

But this has also generated a number of unfortunate consequences. The sheer volume of knowledge available has produced little understanding. Facts are now the weapons of choice in our culture wars and the more shots are fired the less the facts themselves seem to matter. There’s a statistic to justify every worldview and political opinion under the sun and adjudicating between them has become everyone’s business.

So we’re going to talk about these ideas and tradeoffs in our conversation this week. Is all this information at our literal fingertips a gift or a burden? And yes, of course you could say that it’s both. But if that’s the case, under what conditions does the gift/burden distinction kick in? With all this information so readily available, what excuse do you have to be ignorant about any subject, or unaware of any tragedy or social injustice?

And while we’re thinking about it, what else has smartphones ruined? Remember paper maps …

Join us for the virtual conversation beginning tomorrow evening at 7 pm. Click on the link below to join the discussion on Zoom.