If you’ve never seen the Monty Python sketch “The Bishop” you might be missing out. In the sketch, a bishop, dressed in full ceremonial, Eucharist vestment, travels around in a muscle car with a gang of vicars, trying to thwart crime. He shoulders strangers in the street and bears a hardened gumshoe sort of accent, often with a cigarette dangling out of his mouth. Of course, that description doesn’t really capture the hilarity of the sketch. I was able to find a brief trailer of the sketch on YouTube, but if you are able to find the fuller cut, I highly recommend it!

I often think of this sketch when I think of the Bishop of Myra, St. Nicholas, whose feast day is Sunday! Maybe you’ve seen the memes: 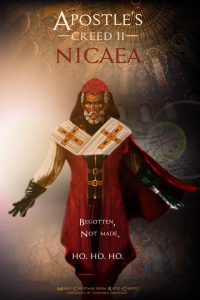 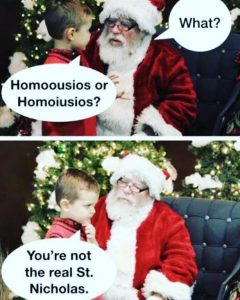 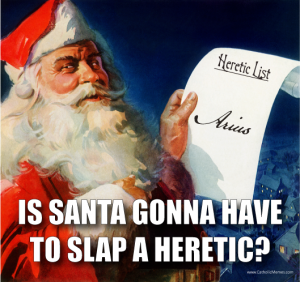 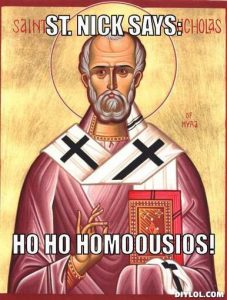 I know what many of you are thinking: wut (that how the cool kids are spelling “What?” with a tone of utter disbelief and cynicism these days). What’s this business about St. Nicholas slapping or punching heretics? What’s this “homoousios” vs. “homoiousios” stuff? What does this have to do with Santa? Well, maybe not much, actually. (Please note: if you are a child under 10 and you do not want your faith in Santa Claus shaken, read no further!) 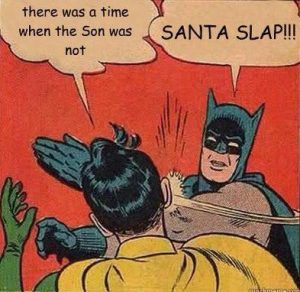 John McGuckin, emeritus professor of Church History at Union Theological Seminary in New York, has written about the difference between St. Nicholas and Santa Claus in a pretty straightforward op-ed, which is helpfully expanded in this very worthwhile and highly enjoyable lecture on Santa (the heart of his lecture starts around 3:15). Needless to say, the Santa Claus of our December feasting is considerably altered from the figure of St. Nicholas, according to Christian tradition, who was himself probably a composite of several St. Nicholas’s. The memes reflect the memory of Nicholas of Myra, as a bishop of the Church at the Council of Nicaea in 325, who confronted the arch-heretic Arius. Arius taught that “there was a time when he [that is, Christ] was not.” For Arius, Christ was not eternal, but the first of God’s creations; he was not of the same being as God (homoousios in Greek), but of a similar being as God (homoiousios in Greek). And that means, for Arius, Christ was not “God from God, Light from Light, begotten not made, of one being [homoousios] with the Father.” The Nicene Creed introduced all of these phrases that we affirm every week precisely to challenge the teachings of Arius and to affirm the full divinity of Christ. Nicholas of Myra is remembered here, not only for confronting Arius at the Council, but for being so disturbed by his teachings that he slapped (or punched) him! 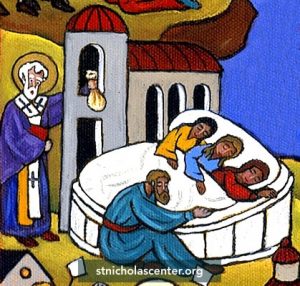 But Nicholas of Myra came to be conflated with other figures named Nicholas (other bishops and saints, it turns out), and the legends of their deeds coalesced. The other things for which St. Nicholas is most known is his work of generosity and justice. There is a bit of this still left in our Santa Claus: a lump of coal for bad children, toys for good children, no one forgotten. This is a vague memory probably of Nicholas of Zion (6th century), who intervened in the slave markets of Asia Minor, purchasing the freedom of Black Peter, whose black-face caricature has become a mark of shame on an otherwise noble story. But the story of gold or toys in the shoes, or down the chimney, comes from a story of poverty and sexual slavery. The poor in 6th century Asia Minor had the option of selling their children into slavery to pay their debts and keep themselves from physical mutilation and forced seizure of property. The story of St. Nicholas is that he heard about one such father who planned to sell his three daughters when his debts were called to account. Instead of allowing such social decay to fester among Christians, Nicholas the bishop raided the Diocesan purse and dropped the gold to redeem the man and his daughters down the chimney, so that the father could save face. The story of Santa’s gifts, then, is a story of redeeming the poor and the vulnerable and challenging deeply ingrained social sins.

These are the themes that make St. Nicholas so important for us today: St. Nicholas, who affirmed that God – the God of Israel, the Living God, and not just one of God’s special creatures – had come to be with us in Christ, to be with those who are in need, the broken-hearted, the afraid, the lonely, and the poor; and St. Nicholas, who was so clothed in the God who draws near that he expended his own treasures out of Christ’s love for the poor, to break the chains of wickedness that bound his people, dauntless in doing what is just and resisting the evils of his society, no matter how accepted they had become.

May St. Nicholas’s radical generosity and fire for justice help us, too, this Advent to draw closer to the God who draws near! 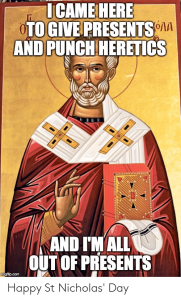