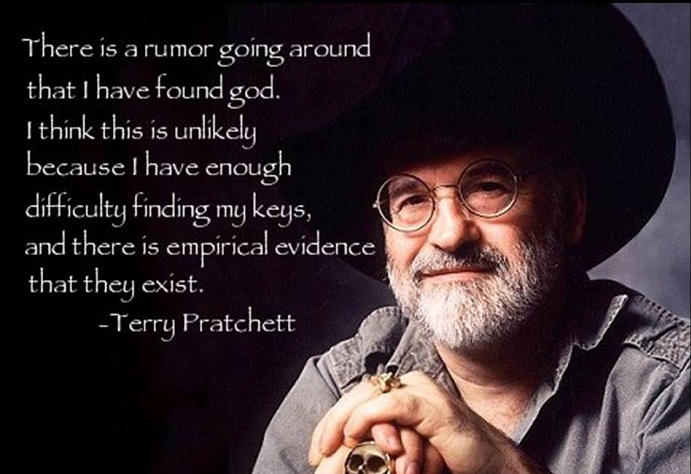 Sir Terry Pratchett, the English humorist, satirist, and author of often comical fantasy and science fiction novels, died in 2015, several years after having been diagnosed with Alzheimer’s disease. In 2008, as he was coming to terms with how this disease had, and was going, to effect his remaining years, he published an essay in The Daily Mail from which the quote above comes.

In the essay Pratchett, describes his upbringing as traditionally Church of England, “which is to say that while churchgoing did not figure in my family’s plans for the Sabbath, practically all the Ten Commandments were obeyed by instinct and a general air of reason, and kindness and decency prevailed.” But he also wrestles with his lifelong frustration of always having with having more questions than there were good answers.

On first reading, the quote above would suggest that Pratchett had thought about, and ultimately, rejected the idea of God. But Pratchett is more complicated than that. As he writes at the start of his essay, “[S]ince contracting Alzheimer’s disease I have spent my long winter walks trying to work out what it is that I really, if anything, believe.”

Continuing from the quote, Pratchett writes: “But it is true that in an interview I gave recently I did describe a sudden, distinct feeling I had one hectic day that everything I was doing was right and things were happening as they should. It seemed like the memory of a voice and it came wrapped in its own brief little bubble of tranquillity. I’m not used to this.” How did he come to understand what this experience mean? Here is what he wrote:

So what shall I make of the voice that spoke to me recently as I was scuttling around getting ready for yet another spell on a chat-show sofa?

More accurately, it was a memory of a voice in my head, and it told me that everything was OK and things were happening as they should. For a moment, the world had felt at peace. Where did it come from?

Me, actually – the part of all of us that, in my case, caused me to stand in awe the first time I heard Thomas Tallis’s Spem In Alium, and the elation I felt on a walk one day last February, when the light of the setting sun turned a ploughed field into shocking pink; I believe it’s what Abraham felt on the mountain and Einstein did when it turned out that E=mc2.

It’s that moment, that brief epiphany when the universe opens up and shows us something, and in that instant we get just a sense of an order greater than Heaven and, as yet at least, beyond the grasp of Stephen Hawking. It doesn’t require worship, but, I think, rewards intelligence, observation and enquiring minds.

I don’t think I’ve found God, but I may have seen where gods come from.

There is a lot to chew over in Pratchett’s essay, (here’s the link to it again in case you haven’t clicked on it yet) and so we’re going to spend our time in discussion Tuesday evening wrestling with some of it. To start, it was his diagnosis with Alzheimer’s that led Pratchett to really think hard about what he believed, and to consider why he believed it. We’re going to ask that of ourselves. What would it take to get us to ask that question? Second, what do you make of how Pratchett accounted for that voice that spoke to him? He calls it “that brief epiphany when the universe opens up and shows us something …” He doesn’t call it God, but would we?

Join us for the conversation tomorrow evening, Tuesday, Feb. 4, beginning at 7pm at Homegrown Brewing in downtown Oxford.