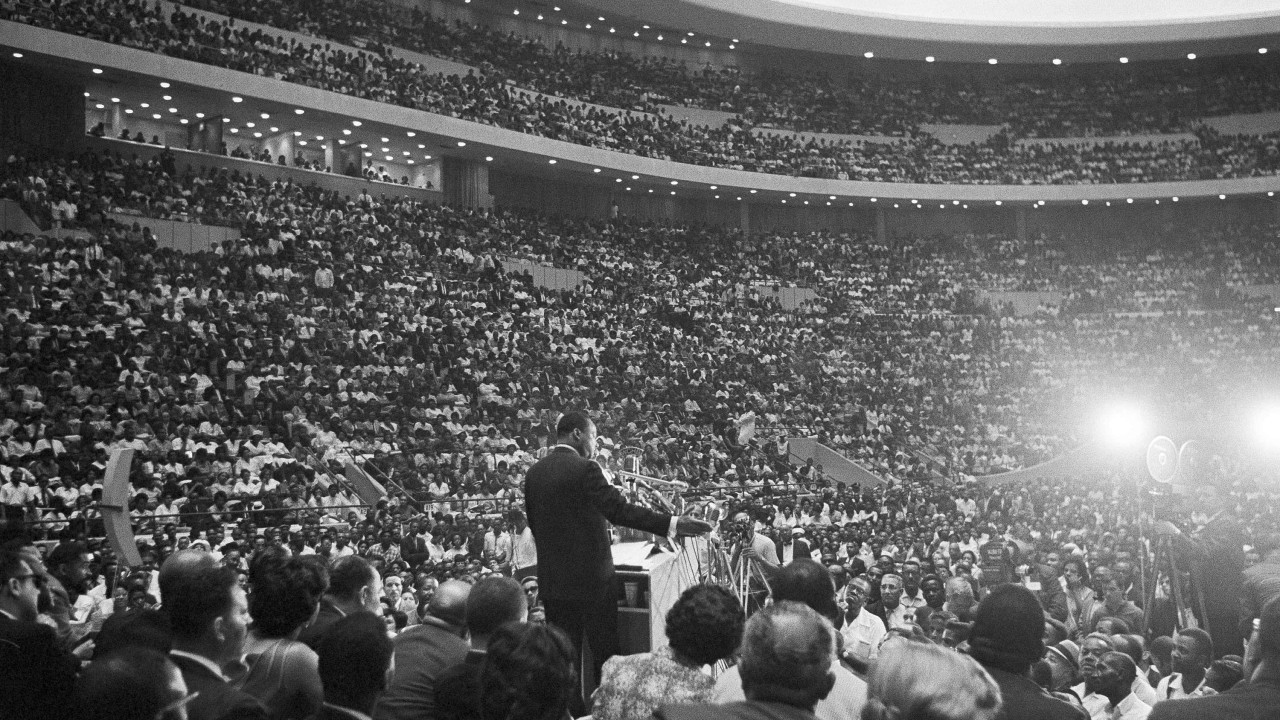 This week we keep with our practice of honoring civil rights icon the Rev. Dr. Martin Luther King on the occasion of the national holiday in his honor. King was assassinated in April 1968. But in June, 1963, King was in Detroit, where he delivered an early draft of what would become his famous “I Have a Dream” speech at Cobo Hall. The speech came after the Detroit Freedom March down Woodward Avenue that drew thousands of civil rights advocates from across the region and the country.

The Detroit version of the speech includes the elements we remember today from his powerful address at the March on Washington two months later. But the Detroit speech is also noteworthy for King’s emphasis on the essential strategy of nonviolence to advance the cause of civil rights. It is worth quoting that section at some length:

And I think by following this approach it will also help us to go into the new age that is emerging with the right attitude. For nonviolence not only calls upon its adherents to avoid external physical violence, but it calls upon them to avoid internal violence of spirit. It calls on them to engage in that something called love. And I know it is difficult sometimes. When I say “love” at this point, I’m not talking about an affectionate emotion. It’s nonsense to urge people, oppressed people, to love their oppressors in an affectionate sense. I’m talking about something much deeper. I’m talking about a sort of understanding, creative, redemptive goodwill for all men.

I quote this from King’s speech because it stands in stark contrast to the words of Bernardine Dohrn, one of the leaders of the Weather Underground, who less than a year after King’s assassination was engaged in an unapologetically violent struggle to overthrow the government of the United States. Speaking in front of a phalanx of television cameras in 1969, Dorhn said:

This kind of justification, blaming circumstances, or their opponents, for their decision to take up arms, is typical of groups and individuals that adopt violence as a means to advance their preferred political or social ends. It is worth thinking about on a day when America celebrates an apostle of nonviolence. And that means it’s worth talking about in our discussion this week.

What do you think about King’s absolute commitment to the strategy of nonviolence? Given the injustices of the time, was that the right approach? Certainly there was criticism, even with the civil rights movement itself, over this strategy. Or do you think Dohrn has a point? In the face of violence and deep injustice, can even people of good will be committed to nonviolence? Where do you come down on these two diametrically opposed perspectives?

Join us for the conversation tomorrow evening, Tuesday, Jan. 21, beginning at 7pm at Homegrown Brewing Company in downtown Oxford.