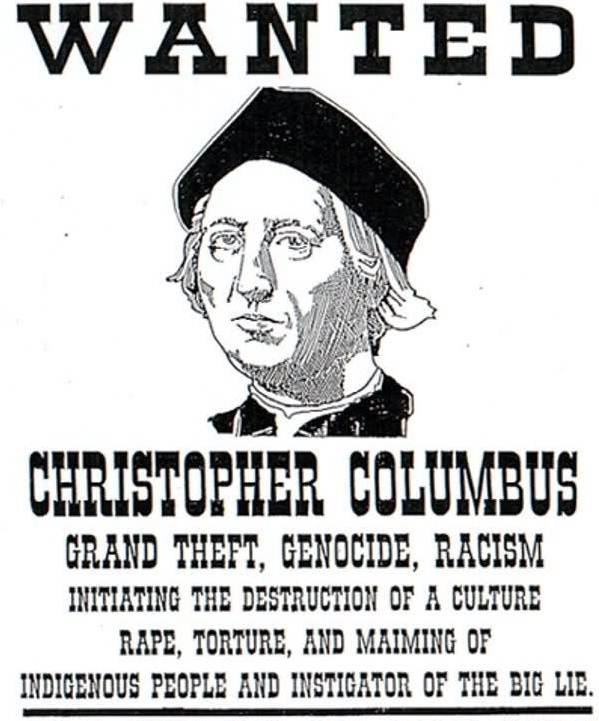 Our collective identity as Americans is wrapped up in a series of national myths — myths about the Pilgrims, our Founders, Manifest Destiny and the “Old West,” the American Dream, and so — that give us a sense of ourselves and our place in the world. On Monday we marked one of those myths, Columbus Day, celebrating the “discovery” of North America by Italian adventurer Christopher Columbus.

It’s a story that I suspect we all learned as children: Columbus and his brave crews sailing the Nina, Pinta, and Santa Maria across the Atlantic on behalf of good king and queen Ferdinand and Isabella of Spain on a quest to find a shorter sea route to the riches of Asia and in the process prove that the Earth was round. Instead, Columbus gets lost, stumbles into the Caribbean, and in the process, as his modern critics charge, sets in motion the destruction of indigenous peoples and their culture, and the theft and ruthless exploitation of their lands.

Yesterday, a bill was introduced in the Michigan state legislature to rebrand Columbus Day as Indigenous Peoples Day, joining eight other states and numerous cities and communities around the country, including Ann Arbor, Lansing, and Ypsilanti, in honoring the original inhabitants of North America rather than the Italian explorer. According to the bill’s sponsor, Sen. Jeff Irwin (D-Ann Arbor):

“Michigan, at the heart of the Great Lakes basin, has a rich and long history, extending long before Europeans first arrived,” Irwin said in a statement. “It is only fitting that we more prominently recognize and celebrate the rich and vibrant, tribal tradition of the indigenous people of Michigan, and of this continent.”

Writing at Patheos, author Jeffrey Burton Russell says the point of such a rebranding is not to prevent people from learning about Columbus. Rather:

… the point is to consider the history of reception and its cultural backdrop so that we are more discerning about the heroes we admire and the myths that inspire us. … We don’t need to flatten out our history books and make them serve this or that agenda. Rather, we need to fill out our history books with greater complexity, showing how diverse, flawed and multi-faceted people, including heroes and eras were.

So this is our topic for discussion tonight. How do we become “more discerning” about our heroes and myths? What do we do with the myths and the stories of heroes that, while inspiring, also present a skewed, or otherwise incomplete picture of our real history? What parts of our history do you think need this kind of scrutiny, and how should future generations learn about these figures and their more complicated pasts?

Join us for the conversation beginning at 7 pm at Homegrown Brewing Company on Lapeer Road in downtown Oxford. This is a new location for us while Lockhart’s undergoes renovation.